At an early age, Sister Madly learned to master some heavy-handed life-hacks, such as respiration and how to use a bendy straw. But one such life-hack that continued to elude her throughout her childhood was how to properly utilize a knife in polite society.

One would think that with Sister Madly’s inclination for all things medieval that she was born wielding the weapon- but this does not guarantee the corresponding intuition of proper knife utilization. Sure, Sister Madly knows the basic safety measures when harvesting human organs down in the secret sub-cellar, and no doubt she could become an expert in fancy knife theatrics in very little time (say, 60 years or so); one can even imagine her as a plucky little lass climbing a ship’s rigging with a knife clenched between her teeth (difficult to do, by the way, without salivating like a St. Bernard.) Yet it took her a substantial amount of time to grasp the fundamentals of knife etiquette at the dinner table- to the point of embarrassment.

She often wondered why her parents had the nerve to serve her food that required a knife and fork when they knew that she was shamelessly incompetent with said knife and fork in the first place (even at that age, Sister Madly was conceited, lazy and naughty.) More often than not, Sister Madly contemplated eating these impossible meals with her hands, but that would probably result in another “you weren’t born in a barn” lecture- although she couldn’t quite understand why this was an insult, seeing as Jesus was born in a barn and some say that he is the Messiah.

The whole situation frustrated her mother the most. “Your father is not going to be there to cut your food for you when you’re on a date, you know.”

Sister Madly was actually rather pleased with this statement, as it assured her that her father would not be tagging along on her dates in later years. Still, that didn’t make the food-cutting task any easier, with the fork held in a clumsy fist and the knife routinely falling to the floor; one could trace such behavior back to her Viking roots, which of course her mother would not understand since these roots are said to be paternal in origin.*

* While Sister Madly may exhibit barbaric tendencies, there is no actual proof that she is of Viking heritage as no one has been able to trace her family tree back more than 3 or 4 generations. But if it can‘t be proven, neither can it be refuted.

Then one evening, her father offered up this modest suggestion:

At first, this seemed illogical. Why, things like pencils, pens, machetes, battleaxes and grenades automatically found their way into her right hand ever since she could remember; surely using a knife with her left would cause the rivers of the world to flow backwards while bringing about the apocalypse. While she was okay with that, Sister Madly still wanted the opportunity to go on a date at least once before the end of the world.

Still, her father had never deliberately steered her wrong (a quality that Sister Madly did not inherit, she is proud to say.) And it is quite possible that she would hit it off with one of the Four Horseman, should her dad be wrong- a date with Famine would most likely not result in sawing away at a stuffed pheasant in some fine French restaurant.

So she switched hands.

It was this bit of parental insight that has sustained Sister Madly into adulthood. Tasks that were next to impossible with her right hand have become effortless with her left, such as throwing a Frisbee, peeling vegetables, striking matches (again, totally inept until the moment she switched hands*) and most importantly, writing on mirrors in lipstick.

* Note: the sudden increase of mysterious fires around town the day after this discovery was purely coincidental.

Sister Madly has yet to go on a date where she is required to use a knife- to cut food, that is. There are other uses for a knife, you know. 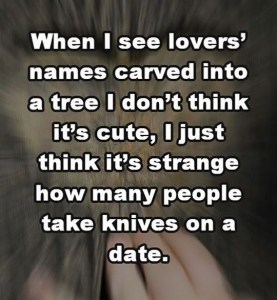 This entry was posted on January 7, 2016 by Sister Madly. It was filed under Life and was tagged with blogging, creative writing, culture, dark, family, humor, madness, personal, Philosophy, prose, weird, wisdom, writing.