A few months ago, Sister Madly became a Vendor at a fabulous Marketplace- she says fabulous, because it does not require her to deal with people directly. Truth be told, if Sister Madly was any good at socializing, she would crash many parties and pretend to know many things…

Like many children in America, Sister Madly discovered capitalism at an early age. While most of her contemporaries embarked upon their entrepreneurial journeys by selling Girl Scout Cookies, a wee Sister Madly forged her way into the Business World through the ultimate black market transaction: the Tooth Fairy.

Now some may say the Tooth Fairy is, like Santa, a myth; but common sense says otherwise. After all, which is more logical: a fat man crawling down the chimney once a year just to leave you some coal in an argyle sock, or a tiny woman approaching you in the dead of night to purchase used body parts for a quarter a piece?

As a most logical Moppet, the answer was obvious.

Of course, she was a bit skeptical at first; but after selling about 75¢ worth of teeth to Tinkerbell, Sister Madly was convinced there was a market for discarded body parts. Clearly there was a corporation dealing exclusively in baby teeth, something Sister Madly had in abundance; perhaps she could sell the Corporation her teeth- as well as those of her classmates- in bulk, and get a lump sum. It should be relatively easy to convince her classmates to eat a handful of rocks- at least the first time…

Besides, it’s not like Sister Madly needed all her teeth at that moment. Sure, she was about to be in her cousin’s wedding, but Sister Madly was practically invisible thus no one would notice that the flower girl was missing all of her pearly whites.

But before she got the chance to discuss this business proposition with Tinkerbell, Sister Madly had a thought: what if there wasn’t an agent between her and the Corporation? Just imagine how much more money she could make if she peddled her own teeth directly- at least 65¢ apiece. That’s more than the price of a candy bar!* And if the teeth were sold in bulk, that would save the Corporation money in the long run- Sister Madly didn’t understand how, but her Father once assured her that one could save money by buying in bulk. Yes, perhaps it was time for Sister Madly to dispose of this Tinkerbell and take her rightful place as the Tooth Fairy.

* Foolish are ye who thought this most angelic Sister Madly was eating kale back in the 80’s. Kale hadn’t been invented yet. 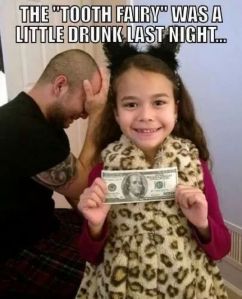 Now, since there was market for baby teeth, what other discarded body parts were in demand? What is the going rate for an inch of Moppet hair? How about fingernails? Sister Madly was aware that she and her classmates would only be a source of baby teeth for so long, thus she had to plan for her future lest she end up on the streets at the ancient age of 8 in a potato sack with a tin cup full of coins.

Not to mention her classmates were an endless source of hair…

Due to parental disapproval, Sister Madly was unable to take her rightful place as the Tooth Fairy, which no doubt would have improved the social skills that would allow her to crash many parties and pretend to know many things.

This entry was posted on January 10, 2020 by Sister Madly. It was filed under Food and was tagged with business, children, Cooking, dark, family, horror, humor, madness, prose, recipes, vegetarian, writing.