It was over 5 years ago that the Chair first appeared on the sidewalk, and Sister Madly wanted it. She didn’t need another chair and the thing was as ugly as incompetent gumbo, but by golly it was free, thus worthy of bragging rights- much like her CD single of Milli Vanilli’s Girl I’m Gonna Miss You once found in a free bin. Sister Madly’s a sucker for nostalgia.

She spent the day watching the Chair from the window, her wide eyes and polished halo assuring those passing by that she only wanted to make sure the Chair returned to its rightful owner; however, what Sister Madly really wanted was to be sure she was the one to claim it.

All afternoon, she paced back and forth through the kitchen, carrying on imaginary conversations with potential rivals while boxing mosquitoes and strumming her lips in utter boredom. After midnight, she and Tallulah hauled the monstrosity inside.

It soon became clear that not only did the Chair want the apartment to itself, that had been its intent all along, letting such wishes be known by the most satanic stench that only a Chair of that pomposity could produce: cigars, swamp gas, death, and tuna-marinated soccer feet. It happened overnight, making much of itself in the apartment like an unwelcomed uncle. Never once did Sister Madly think that there might be something wrong with the Chair as it was cheerfully lugged into the flat- it was absolutely hideous, sure, but Sister Madly had convinced herself that it was in a delightfully tacky sort of way.

It wasn’t long after that Sister Madly came up with a plan, one that included Tallulah, an abandoned truck, and just enough detail to make the lives of those involved thoroughly inconvenient: said truck- and everything that just happened to be inside of it- was to be towed within 72 hours per the obnoxious sticker on the window. If all went as planned, both Chair and truck would be happily tucked away in some impound lot within a week’s time.

Tallulah, however, thought it best to leave the Chair on the side of the road as it was found, albeit after dark. This sister/roommate/she-who-is-often-not-around-when-disaster-strikes was sometimes grown-up and unfun like that.

After successfully begging, sulking, and plying her with wine, it suddenly made sense to now wise Tallulah to leave the Chair inside the Soon-To-Be-Towed Truck at midnight- a plan that was ruthlessly thwarted by the City, who had towed the truck earlier that day during the plying-with-wine fest.

The entire block was then circled as the two tipsy yet wise siblings attempted to abandon the neon-striped horror in a place that was not in full-view of twenty apartments; there was even talk of burying the beast in the cemetery, as it already smelled of death and would probably go unnoticed. But the Chair had become quite attached to Sister Madly, refusing to roll over the cracks, clinging desperately to the curbs, even sacrificing a wheel to the sewer grate in an attempt to remain with its true love.

It was at the sight of an old man watching from his window the siblings realized that, wherever the Chair ended up, someone would know exactly who was responsible, and that put an almighty damper on the evening. When the lovable curmudgeon made the expected “What the hell…?” inquiry, Sister Madly said that they were taking their easy Chair for a walk, and there was no city ordinance against that.

For tonight, Dancing Eyeball will be standing in
for Lovable Curmudgeon.

The Chair returned home with them that night, locked away once again in the spare room. It was frequently bathed Febreze and other ritual oils in an attempt to keep it smelling fresh, so that when some psychotic recipient finally stands up and exclaims, “Hullo, I want that hideous thing!” he would not know of its Pit of Hell origin.

But it was the Goodwill Donation Truck that wound up with the Chair in the end. But that doesn’t matter, really; Sister Madly got it inside a truck after all. 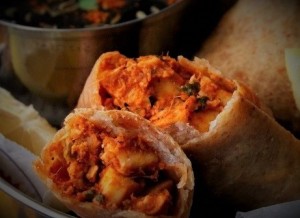 PREPARING SAMOSAS
Preheat oven to 400*
Roll out pastry sheets; cut into 9 squares (approx 4”x4”ea)
Add filling to the center of each square
Fold pastry over filling
Brush egg wash over pastry
Bake 20-25 minutes, or until golden

This entry was posted on October 1, 2017 by Sister Madly. It was filed under Food and was tagged with blogging, Cooking, culture, dark, family, humor, Life, personal, prose, recipes, relationships, writing.