Leaving Sister Madly to her own devices often results in a lot of no good, whether it be needlessly updating her revenge list, engaging in what-happens-when-you-do-this curiosities, or making what-the-hell purchases. Some of her more recent what-the-hell purchases have included a shrimp fork, a parsnip, a purple doorknob, a zebra print shower cap, and an antique opium pipe.

Unlike the shrimp fork, the opium pipe has become the prize of her collection, one subject to regular dustings and impish smiles- it even has its own display rack. So when she found that the pipe was coming loose in places, Sister Madly stuck it back together again with a little known adhesive called Super Glue… 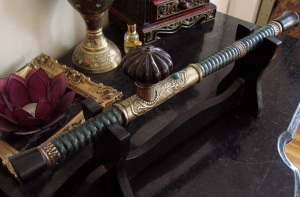 Yes, there were visions of Sister Madly waltzing into Walgreens with an opium pipe glued to her hand in an attempt to find some nail polish remover. Tallulah, her sister/roommate/she-who-had-called-earlier-in-the-day-to-say-that-she-would-not-be-coming-home-that-night, had only acetone-free nail polish remover, lord knows why. Apparently, she did not even consider the possibility of Sister Madly fusing herself to an opium pipe at 11:30 one fine autumn night. Sister Madly finds this very irresponsible of Tallulah.

There was also the small matter of having to explain this predicament should someone ask- particularly someone with authority. Sister Madly hadn’t been smoking the pipe, most assuredly, but having just glued it to her hand might cause one to doubt her credibility, if not her faculties.

Faced with this possibility, she decided to tackle this predicament on her own, thank you, through a ritual that involved primordial grunting, cursing of the gods and methodically ripping her hand away from the pipe, thus returning herself to her former glory. It is safe to say that the pain was minimal compared to the humiliation which no doubt would have resulted from the aforementioned Walgreens scenario. As for the loss of skin… actually, there was no skin lost; Sister Madly knew exactly where it was.

Needless to say, one should know better than to send an unsupervised Sister Madly out for sweet potatoes. This resulted in a big roll of blue bubble wrap, some bendy straws, chocolate milk, and several pounds of shallots.

She did manage to get the sweet potatoes, although they were purple…

In a large stock pot, saute onion and garlic in butter or oil until tender
Add sweet potatoes, chicken broth, cumin and jalapenos
Cover and cook until potatoes are tender
Add cilantro and cream
Coarsely mash potatoes with a potato masher
Add carrots and celery
Simmer for 15 minutes, stirring frequently

This entry was posted on February 5, 2014 by Sister Madly. It was filed under Food and was tagged with blog, dark, entertainment, humor, Life, madness, opium pipe, recipes, satire, sister madly, weird, writing.